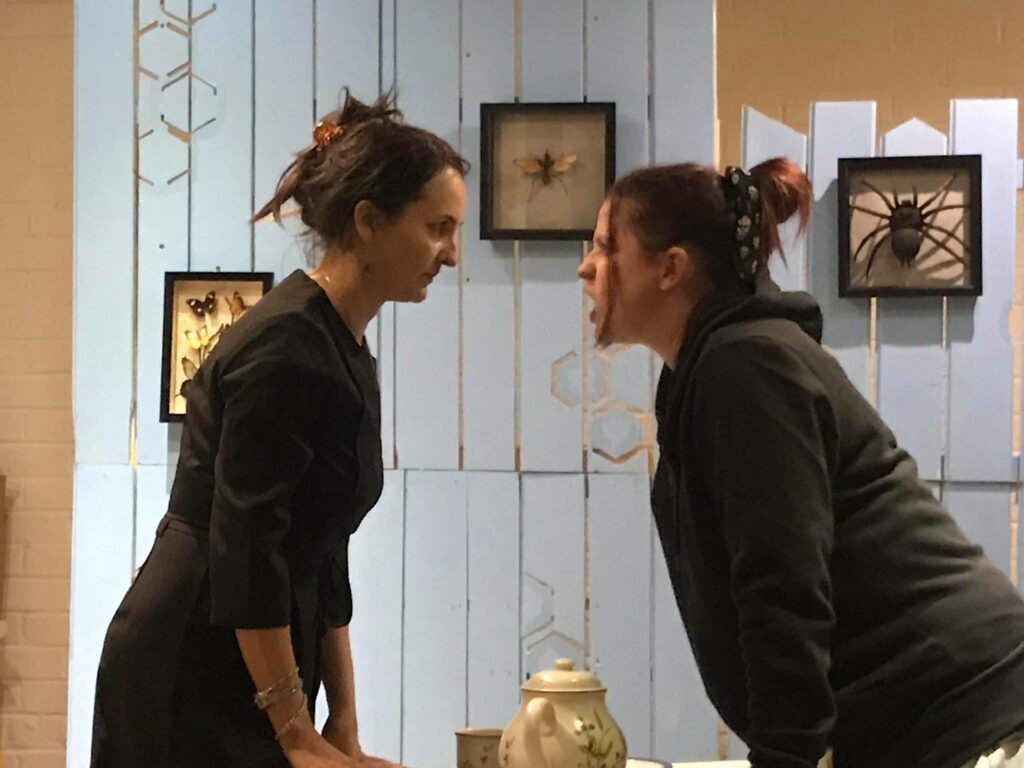 The Wasp, by Morgan Lloyd Malcolm depicts the encounter of two old school mates as they are reunited for the first time in twenty years. These two friends could not be more different, yet a startling proposition bonds them once more as their fraught history resurfaces with serious repercussions.

Peppered Wit Productions took this ambitious play on with great confidence and control, not being intimidated by the density of it. As a two-hander both actresses, Joanne Sammons and Tara Lacey kept up their stamina and their energy buoyant throughout the ninety minute play. Barely leaving the stage, they were engaging and took the audience on a journey with them providing a believable performance with the characters developing well.

Malcolm’s writing at times can be curt and Pinteresque and then contrast with lengthy monologue type responses – this could easily be lost by actors with less understanding, yet Lacey and Sammons both acknowledged the significance of each word so the author’s themes could be truly heard.

Peppered Wit Productions is a self funded company, creating their work collectively. They are an example of what collaboration done well looks like. The set design and directorial choices were well placed and executed with quality and professionalism – all done on what one can only image to be a somewhat meagre budget. They are also dedicated to bring theatre to audiences far and wide, making it accessible to communities who are often marginalised and left on the outskirts of the theatrical world. This is a very commendable trait of this accomplished theatre troupe.

The Wasp is a tale of psychological turns and societal dichotomies. Malcolm asks questions about the inherent nature of violence within human beings, about nature vs nurture and how childhood is more than simply a time in our past but the foundation and catalyst to our future life choices – all of which was depicted with dexterity, humour and commitment.

Click here to see more of our latest reviews on thespyinthestalls.com

'Productive day' post...& they can be hard to come by!
#NothingToLose is moving on apace!
Wrap your little ones up in layers of Tudor history! Online classes for 7-11year olds beginning shortly...
Back in Tudor garb for the first time in a very long while....running a series of Tudor history classes online for primary aged littlies.
Time to share our current project...an international collaboration born from necessity and human experience; a dark comedy for 2021, by Sarah McCay Tams. Watch out for further details!
Dipping into the Peppered Wit archives: