THE WASP by Morgan Lloyd Malcom. 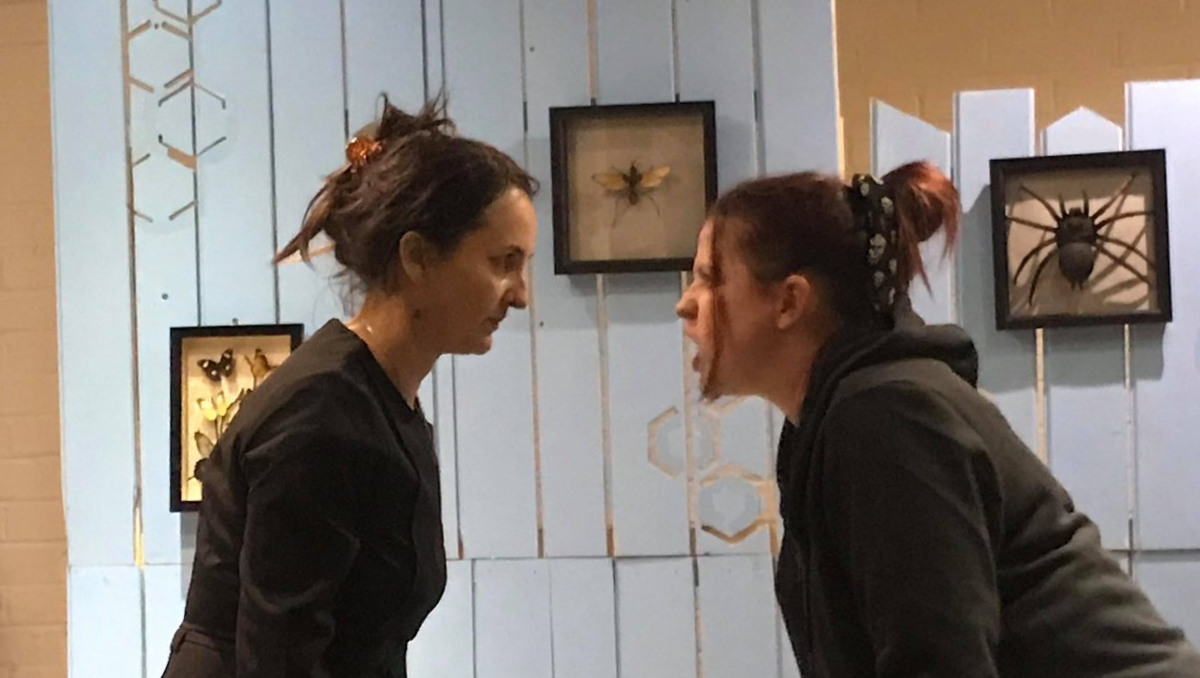 ‘Shockingly entertaining thriller’ ★★★★.5
The simplicity of the premise, two old school friends who reunite in a coffee shop is played out with dark humour and uses a simple set. This twisted play first opened in 2015 at the Hampstead theatre written by Morgan Lloyd Malcolm recently recognised for her critically acclaimed play Emilia. The antagonistic, minutely observed interaction of female dynamics shine in this two hander about friendship, class, trauma and revenge. Previewing in Guildford before hitting the Edinburgh fringe, this small scale self-funded production by Peppered Wit packs a big punch by focusing tightly on the story being told.
Heather and Carla haven’t seen each other since school. Carla is about to give birth to her fifth child. Working in a supermarket, married to a man twice her age, she is living a hand to mouth existence. In perfect juxtaposition is Heather, a career orientated woman with a beautiful home and a dull husband and a history of failed IVF. When Heather arranges a meeting with Carla to make her an offer it is not the one you will expect.
Over tea, Heather talks about her transformation from a schoolgirl with plaits and glasses from a steady middle-class family, who in year 7 was Carla’s best friend. By the end of that year, Heather had become Carla’s victim, tormented viciously and hiding in the art room.
Heather played brilliantly by Tara Lacey adds a sharply comic edge as she awkwardly and politely confronts her past with a bag of cash and a proposition setting in motion this electric thriller on how our playground experiences can haunt the darkest corners of our adulthood.
At 90 minutes, without an interval, the Wasp relies on two fantastically nuanced performances that Tara Lacey and Joanne Sammons deliver. Tara performs confidently and is a joy to watch, as Heather’s past and future collide in a breath-taking climax. Joanne Sammons as Carla is at times in danger of feeling like a stock character from EastEnders – but in the second act she is spectacular, drawing a collective gasp from the audience. Together they work radiantly, with a crackling tension and energy that never falters. Also, a mention for Rob Hall’s excellent delivery of an essential line!
Peppered Wit have focused brilliantly on telling Carla and Heather’s story through strong characterisation and quick, tight pacing that consistently leaves the audience on the backfoot as our sympathies shift and sway through the ever-evolving power battle between the abused and the abuser.
As the lines blur, the reveals come in thick and fast, with a powerful ending and a visible audience reaction. The haunting last line imitates the ripple effect of traumatic violence that creates victims and villains and asks questions of how far we are willing to go to right other’s wrongs.
THE WASP, in Peppered Wit’s capable hands present a terrifyingly, realistic portrait of two fully rounded, flawed, vulnerable and genuinely petrifying female characters. This shockingly entertaining thriller should be on every Edinburgh Festival’s must-see list.
The Wasp
Morgan Lloyd Malcom
Peppered Wit Productions
19th- 24th August, Edinburgh Fringe Festival, Greenside@ Infirmary.
https://tickets.edfringe.com/whats-on#q=the%20wasp
Reviewer Sara Butler is a writer of plays and short stories from London. One half of the writing team the Storyfleas, their work has been produced at the Old Red Lion, Brockley Jack and the Space. She can mostly be found touring Borough Market and will read anything that crosses her path from classics to abandoned shopping lists. @MadameNim