Tara and Rob from Peppered Wit joined up with writers from Jolly Good Show to record a series of comedy podcasts. Watch this space to hear the results!

We have had over 60 submissions of new writing so thank you to all the authors who have sent us their work. We are in the process of reading each play and will reply to everybody with our thoughts. We have already read some excellent plays and the standard is extremely high!

Are you an author?

Peppered Wit are looking for new and challenging material for 2015 for performance at the Fringe Festivals and theatre tours.

We are looking for something edgy that will challenge audiences and actors alike!

If you have something you’d like us to read then please send it to tara@pepperedwit.co.uk and we’ll be straight back to you.

Tickets are on sale now for our show in Banbury at The Mill Arts Centre.

Camden Fringe: The Collector, Upstairs at the Gatehouse

Cons: Some of the more serious action doesn’t necessarily lend itself to being acted naturalistically.

Our Verdict: Chilling and thought-provoking. Well worth seeing.

It’s been while since I have been to the theatre and come away genuinely not knowing what to think. The issues explored in this updated version of The Collector by Peppered Wit Productions at Upstairs at the Gatehouse made me reconsider the complexity of modern relationships. The delusion and dangerous simplicity bound up with longing and unrequited desire. The cruel ease with which social status, first impressions, self-worth and isolation can dictate the way we interact with others. How social structures can disenfranchise us, not just materially but also emotionally and intellectually. How easily we judge one single act as wrong without fully considering the motivations. How chillingly easy it is for us to justify our own actions.

The collector of the title is socially repressed Frederick Clegg. He works in a job centre, collects natural specimens in his spare time, and ardently admires art student Miranda from afar. He is far too shy to talk to her. He knows she wouldn’t give him the time of day anyway. So when he unexpectedly wins the lottery, he buys a house in a remote part of Surrey and abducts her. He sets her up in his cellar, promises to treat her respectfully and to give her everything she could possibly want, except her freedom. His motivation? If Miranda and he could just spend some quality time together, just the two of them, away from everything else, maybe Miranda would get to know him properly and like him for who he is.

Obviously this rationale is seriously flawed, and abduction and imprisonment are fundamentally wrong. Nevertheless, the play is an interesting exploration of the relationship which develops between two characters who turn out not to be as easily pigeon holed as you may expect. The roles of victim and bully are not simple; they’re interchangeable and you come to realise that, to a degree, we are all victims of our own circumstance.

The small company of two were excellent and effortlessly believable. I was genuinely unsettled by Frederick Clegg (Rob Hall) throughout the piece but also often felt sorry for him. I found Miranda (Tara Lacey) annoying and precocious, but admired her strength of character. The piece was cleverly staged and directed in the small but well-fitted-out Gatehouse Theatre. Projections were used cleverly, to hinge the action together and portray scenarios where Miranda was permitted to step foot out of her cellar.

The Collector was chilling and compelling but punctured with humour at the correct moments. There were times when the naturalistic style perhaps made the piece a little less believable. The scenes near the end of the play where the characters physically fought together felt a little laboured, but were necessary to the plot.

This piece is more thought-provoking and complex than a review of this length can give credit to. It tied my thoughts up without offering to untangle them and for this it is my favourite piece so far from this year’s Camden Fringe.

Unfortunately The Collector has finished its run as part of Camden Fringe, but catch it on the 11th September at the Mill Arts Centre in Banbury. Box office: https://www.themillartscentre.co.uk/wps/wcm/connect/micro/millarts/events/millarts-whatson

★★★ – good with some weaknesses 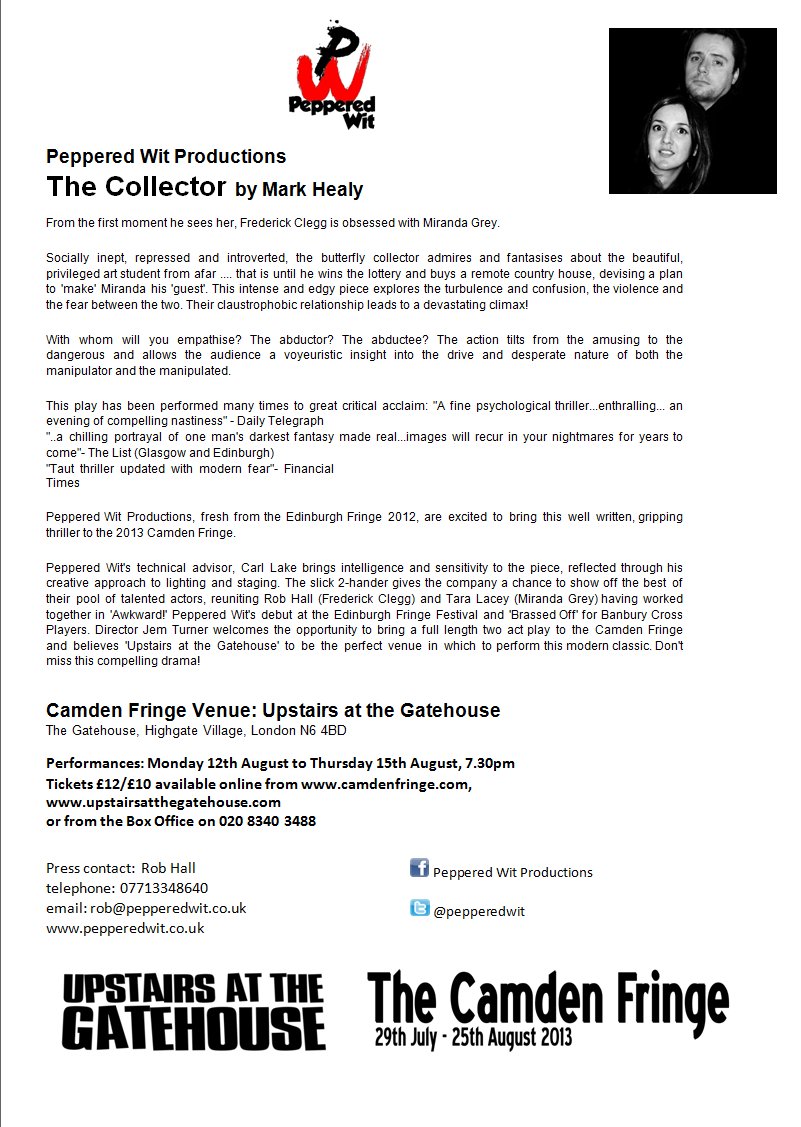 Peppered Wit will perform ‘The Collector’ by Mark Healy at the Camden Fringe from the 12th August 2013 – 15th August 2013 at Upstairs at the Gatehouse.

Our show at the Old Fire Station Oxford

Tickets are now available to buy online for our final show date before Edinburgh.

So if you can’t make it to Scotland come and see us in Oxford at the Old Fire Station on the 4th August!!